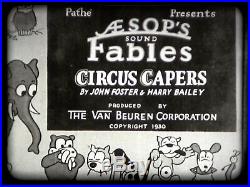 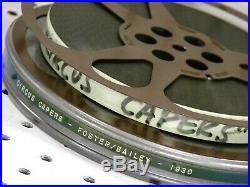 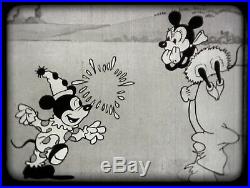 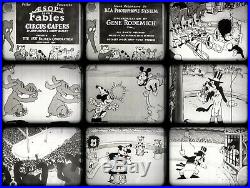 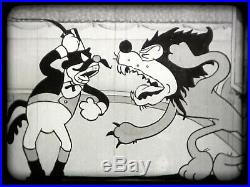 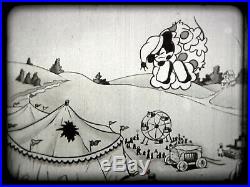 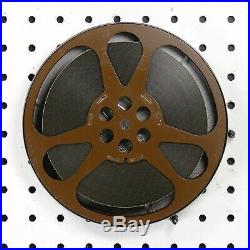 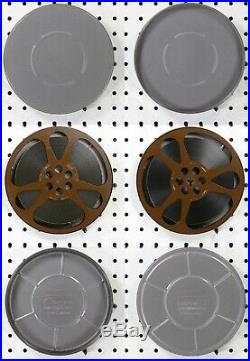 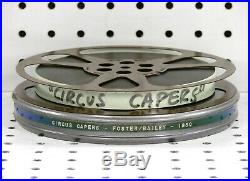 Analog Entertainment At Its Best! 16mm Film: Circus Capers 1930. Bailey/Foster – Aesop – 19m 27s. Print circa: 1974 on 1 400 reel in steel can. Crazy Rare in 16mm! Better than vinyl, this is 16mm film! Directors: Harry Bailey, John Foster. Production Co: Van Beuren Corp. Original Release Date: 1930. Projected Runtime: 8 min 18 sec (without leaders) at 24 fps. Sound Mix: Mono Variable density (stripes). Color: Black and White. Film Stock: Kodak 25, 72 Safety Film. +o Positive (1974, Rochester). Splice Count: 10, including 4 in or attaching leaders and black. Containment: 1 steel 400 reel, steel can. Aspect Ratio: 1.33 : 1. Item Weight: 1 lb, 7 oz. 2 lb, 10 oz. 8 x 8 x 4 Ships padded in all new packaging. Meet Milton and Rita Mouse! (Video may not play well with mobile devices – 2 clicks for desktop – opens new window for YouTube). Circus Capers – 1930 – YouTube. (Please use video controls in lower right to upgrade resolution to 1080 and view fullscreen). Video is from this very print for sale. Better watch it, every frame is visible. This is a used vintage print in Acceptable Condition. Acceptable due to mild bendiness in gate, imperfect center-to-edge focus, 6 internal splices, and some dirt/scratch/splice from source material. If the film is reverse-wound for a year or two, it might correct some of the bend. I acquired this film from a private collector in 1998. It has recently been professionally cleaned and lubricated with dry-silicone infused reverse wiping system. It has been stored in a temperature and humidity controlled environment. Harry Bailey and John Foster made a number of these non-tradition renderings of Aesop and beyond. Circus Capers, like others of the Aesop Fable films follows a sort of stream-of-consciousness often seen in small studio animation and early live action comedies. It has a sense of improvisation, as though the plot had an outline, and the animators were set loose to hit a set of specifics, but were free to go where they pleased in-between. Having done a few minor animations I can say the process is long when each cell is hand-drawn, leaving plenty of time for the mind to wander, and fresh and intricate craziness constantly wish to intrude. So it seems here. A dog ringmaster woos away the mouse bareback rider from the mouse clown. Thats the plots bones, yet the circus cannon is involved, a leopard losses its spots and a lion does a soft-shoe. It is also like an assemblage of GIF loops, as they like to use visual repetition set to music. The video clips are done by re-photography, not a proper telecine. The flicker you see is from the crude video transfer, and is not in the film. The clip is meant to be viewed in 1080 HD and includes photos of reel, cans, leaders and all detected splices, which precede the film in six segments shown concurrently with full-frame segments interspersed. I strongly recommend viewing the video by clicking the Youtube icon, which will open a new window to view on YouTube, and giving you better video controls than the imbedded player provides. Stills are screen grabs from Final Cut, de-interlaced by duplication, so the resolution is half as sharp as the film. Photographs of reels and cans are done on one inch pegboard background for scale. Leader / splice / edge # images made against fluorescent background and may vary slightly in color balance. Why do you charge so much? Because these are rare quality prints of historic films, fully white-glove inspected with all flaws disclosed. Prints are from reliable distributors of the golden age of 16mm film (1950s-1980s), not from seconds houses, not from knock houses. Do I have to take the cans? They dont weigh that much compared to the film. Why is there foam padding in the cans? The foam is not archival and should be removed before storage. Why do the photos show a lot of reels and cans? Both sides of all reels and both sides of each can. What are notched sprockets? These are small curved edged cuts made with a special tool that removes the outer edge of the sprocket wall, preventing a nicked sprocket from tearing the film during white glove inspection. Notching also helps prevent dust/dirt from collecting in nicked sprockets. Only done when the sprocket wall is broken or otherwise damaged. Notching does not interfere with the normal advance of the claw mechanism. What is white-glove inspection? Wearing actual white cotton gloves to prevent finger oils from depositing on the film surface, one spools the film with rewinds while gently gripping the film edges. In this manner one can detect splices, nicks, curbing and other flaws. I subsequently photograph all splices and significant flaws that I detect. What cleaning machine do you use? It is a proprietary design based on the Palomar cleaning/inspection system, but including an edge-cleaning stage and finer cleaning tapes infused with nano-particulate optically flat dry silicone which also functions as a lubricant. The reverse motion of the cleaning spools pulls deposits away from film instantly, and cannot produce the wavy scratching common to hand cleaning by rag and solvent. Usually removes significant deposits, primarily from sprocket and track, but also from picture area and particularly the film edges, where deposits are commonly most heavy yet missed by most cleaning systems short of rewashing in an ultrasonic surfactant bath. No, it will reflect the sale exactly. Can I take a long time to pay? Because Psycles is a solo operation and the Houdini Packaging takes time. When will you leave feedback? Is there anything else you can tell me about this item? Let your eyes be your guide: consult the photos and video for full disclosure of anything overlooked in the text description. And should pay close attention to tracking information, as I do. The item “16mm Film Circus Capers 1930 Bailey/Foster Aesop 19m 27s” is in sale since Wednesday, September 4, 2019. This item is in the category “DVDs & Movies\Film Stock”. The seller is “psycle57″ and is located in Reno, Nevada. This item can be shipped worldwide.