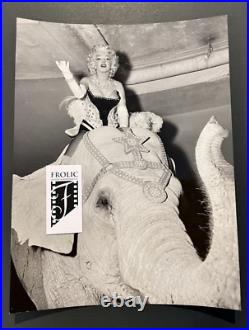 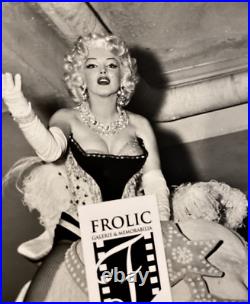 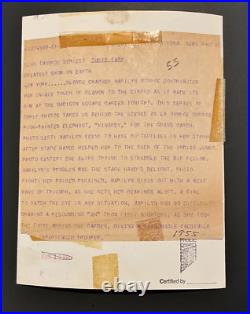 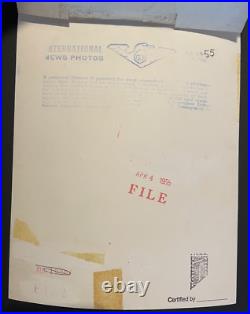 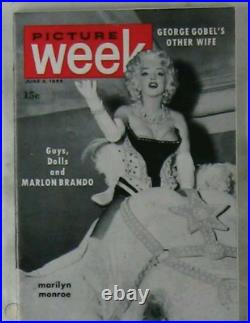 MARILYN MONROE 1955 VINTAGE ORIGINAL PHOTO M. S. G. NEW YORK INTERNATIONAL NEWS (STAMP). Original vintage black and white photograph of Marilyn Monroe atop “KINARDY” the elephant at the 1955 Ringling Bros. Benefit for Arthritis & Rheumatism. Foundation at Madison Square Garden. The benefit was Marilyn’s reintroduction to the spotlight after a years hiatus. Last photo shows the issue of. 1955 Picture Week Marilyn Monroe cover riding “Kinardy” the elephant at Madison Square Garden, this issue was a mini pocket size issue. Description : Original & Vintage black and white photograph. Size : 6 1/2 X 8 1/2. Tone : Black and White. Finish : Glossy, silver gel. Provenance : International News Photo. Fine, was used for publication by the press. Some light creases and toning. Use Zoom for best description. Intage original caption that reads : Greatest Show On Earth… Blonde Charmer Marilyn Monroe. Contributed her unique touch of Glamour to the circus as it made its Bow at The Madison Square Garden Tonight. This series of three photos takes us behind the scenes as la Monroe mounts Pink-Painted Elephant, “Kinardy”, for the. With more explanations describing the other two photographs from the set of 3. The original News Photo ink Stamp is located under the vintage caption. HIGHLY RECOMMENDED VINTAGE ORIGINAL 1955 MARILYN MONROE RARE PHOTOGRAPH. (1926 – 1962) was an American actress, model and singer. Famous for playing comedic. Characters, she became one of the most popular SEX SYMBOLS. Of the 1950s and early 1960s. Long after her death, Monroe remains a major icon of Pop Culture. In 1999, the American Film Institute. Ranked her SIXTH (6) on their list of the. GREATEST FEMAL SCREEN LEGENDS FROM THE GOLD AGE OF HOLLYWOOD. WE SELL ONLY ORIGINAL PHOTOGRAPHS, THE FROLIC LOGO DOES NOT APPEAR ON THE ACTUAL PHOTO. Our photographs are truly valuable and a great investment. The clarity offered in original photographs can be. Tailored to any special design, one-of-a-kind wall murale? Some were used to create 10 X 15 feet exclusive. Wall design at home or office. NO COPYRIGHTS GIVEN – FOR PERSONAL USE ONLY. Frolic Gallery & memorabilia Inc, is a Quebec Inc. For an estimate of these charges, we suggest you contact your local post office or local Government. ALL THE ORIGINAL PHOTOGRAPHS WE SELL, ARE PART OF THE FROLIC 100 YEARS OLD COLLECTION. This item is in the category “Collectibles\Photographic Images\Photographs”. The seller is “frolicgallery” and is located in this country: CA. This item can be shipped worldwide.